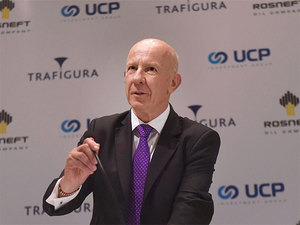 ET Now: Was it difficult to convince investors?

Tony Fountain: I think the attraction of this deal for the investors is apparent. I mean here it is this is a key piece of the energy infrastructure of India, very rare in the world to get an opportunity to buy assets of this quality. It is very attractive to investors, clearly part of that attraction is not only what exists on the ground today but also ways of expanding those assets. We want to get back to to our asset development plan and I think with stronger financial backbone in those type of investments, it can become possible.

ET Now: But one of the major drivers for this deal was the fact that the Essar Group wanted to deleverage its balance sheet. Post this deal, could you give us a sense of what portion of the deal has been earmarked for paying back the lenders consortium?

Tony Fountain: We have paid back small amounts of the debt to EOL. In a couple of cases, where we have had excellent dialogue and support from the local banks. We continued with about five billion, including a billion dollars of working capital support which we have taken on and then over the coming months, we will look to optimise and think about the right debts, the right debt structure and the right debt instruments.

ET Now: The former promoters Ruia Group are still going to hold a 2% stake in Essar Oil. Any reason why this was part of the deal terms and conditions?

Tony Fountain: It is a complex negotiation. This was part of negotiation. I am not privy to all the elements of the negotiation but it is true that the Essar Group will continue to be in the consortium with Trafigura and UCP. They hold 2% of that and that will give them 1% of the overall company and I am sure that is attractive to them.

Tony Fountain: I think it is helpful to distinguish between non compete and branding license. In terms of I think concerns of branding license, there is an arrangement of a set of payments which are commercially sensitive but those go on for a very long time indeed as part of the access to the Essar name as part for the retail brand side.

ET Now: What are the plans that you have as far as the expansion is concerned at the Vadinar refinery?

Tony Fountain: I think the investors are attracted to this because of some of these expansion zones. We are clearly looking to drive the retail up 3000 to 6000 sites is the existing plan. We continue to drive that forward and from the wider expansions that may exist at the refinery logistics other assets that is part of the challenge that has been given to the new CEO Mr Anand. We expect him to push, to develop an asset development plan and bring that to the board in due course but clearly we are expecting to see some exciting opportunities because that is why this investment has been made.

ET Now: Now that Essar has some really marquee global investors on board and financing should not really be a problem, how do you intend to take on the likes of domestic rivals like RIL in the energy sector?

Tony Fountain: The domestic retail marketing is an exciting space and Essar has probably reopened and re-grown faster than any of the competitors in this market. There is room for many players and I look forward to competition.